Before I start giving you the results, I think I need to state the obvious.  Can the rifle shoot?  Yes.  Can I shoot?  Debatable.  Now that I've been honest, I will be able to sleep at night and I can continue with the review.  Also, keep in mind that you will see every shot made while at the range.  I didn't hold anything back in an attempt to bias your opinion one way or another.  This is a complete disclosure reflecting the combination of the rifle, ammo, shooting rest, and my capabilities.

If you don't remember the post on my ammo selection, I decided to get one box of each of the following:
I also got several boxes of PMC Bronze FMJ-BT 147 gr. (Plinking Ammo).
Since I already got the scope zero close at a 25 yard indoor range, I went directly to the 100 yard range.  I borrowed a friend's Caldwell Lead Sled for this range test.  Actually, I wish I hand not put all my eggs in this "rest" basket.  I became frustrated with the slop in the Lead Sled and you will be able to see that later below.

This is the 100 yard range and my setup for the test.  I also brought along my AR-15 to plink a little while I was waiting for the barrel to cool down on my FNAR. 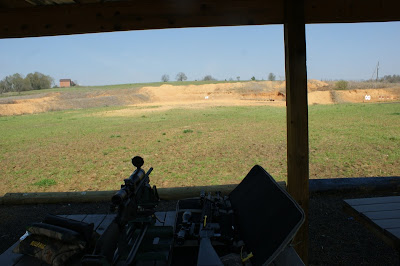 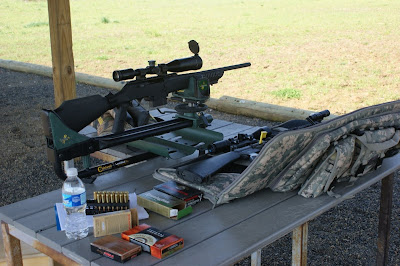 My first 6 shots are shown below and I was using the PMC 147 grain FMJ-BT.  I used these shots to verify I was on the paper and to dial in my scope for the remainder of the tests.  The 3 shots in the upper left corner were my first three and they grouped 1.44".  After making a scope adjustment, my next three were closer and grouped 1.54".  I was pretty excited with these results for this cheap ammo, but was a little surprised to see the first three this far off from my initial zero.  Clearly this is the difference from shooting from the Bulls Bag to shooting from the Lead Sled. 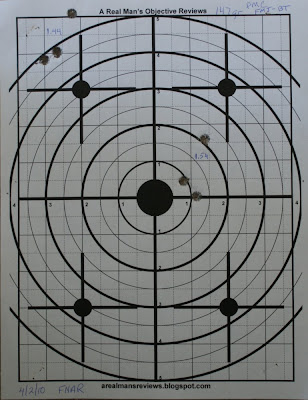 Next I decided to see what it can really do with match ammo, so I switched to the Hornady A-MAX.  Really this was a big mistake because I only had one box and I didn't realize that the Lead Sled had freeplay at the back foot area where you fine tune the elevation.  It took me shooting three differen five shot groups to realize how I needed to hold this rest to keep it from having a side to side wiggle.  I don't think this wiggle was as noticeable with the PMC due to the lighter round (less recoil).  It wasn't until the fourth 5 shot group that I really was able to show what the rifle can do.  What you should also notice is that vertically, 19 out of 20 shots are within about a 1.5" vertical spread.  That says something.
Hornady A-MAX 168 grain, 100 yards, 2.79" group 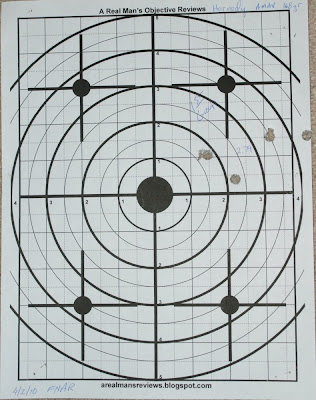 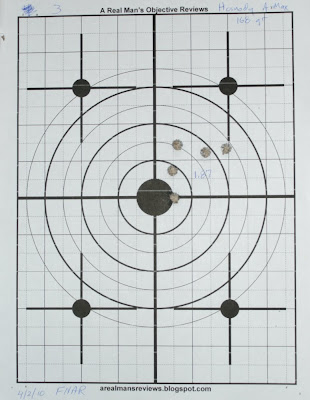 Hornady A-MAX 168 grain, 100 yards, 0.94" group.  Finally, this is what I was wanting to see.  FNH said it could do it and I proved it could.  Also keep in mind that this is a 5 shot group.  What are the odds that I got all 5 to stack up like this from just luck?  I think I finally figured out how to shoot the rest.  The trick with the Lead Sled was that I had to hold all the slop in a single direction while shooting.  In my mind, you should not have to pay $200ish and get something with loosness. 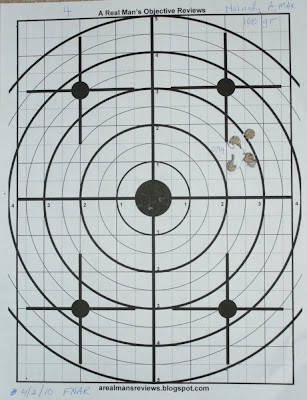 Now I was out of the match ammo and I had just gotten the feel for how to shoot the rifle in the rest.  The more I thought about it, starting out with the best ammo first was a dufus move on my part.  I started with the best ammo and with a rest system I had never used before.  On top of that, why did I purchase only one box of match ammo?  All I can say is that in the future, you will not see this mistake again.

After I tweaked the scope for windage, I switched to the Winchester Ballistic Silvertip.  That is when things went  to crap.  I was thinking that if the match ammo (cheapest I could get) was doing good, then the more expensive hunting ammo should come close.  What is close?  I would have thought close would have been better than I got.  Honestly, I don't know if it was me, the ammo, or the Lead Sled, but you will see that the Winchester didn't do very well.  I shot my first three groups in a row and the held back a fourth group until the very end.  I thought that if I held it to the end it would make a difference once I figured out all the issues with my shooting style and the rest.  The four groups are below. 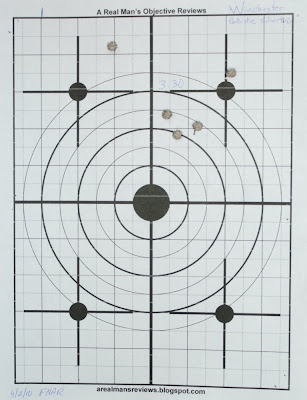 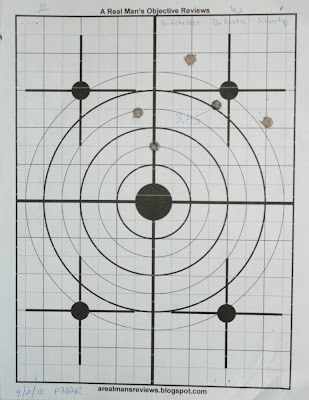 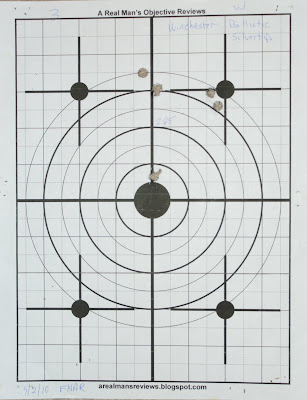 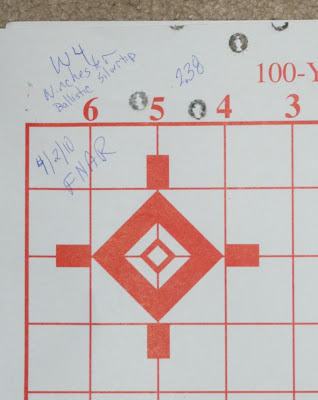 The best I could get out of the Winchester was a 2.38" five shot group.  This was a little disappointing, but I had more ammo to checkout.
Now I decided I would try the Remington Accutip.  Keep in mind that I did not make any changes to the windage or elevation on my scope for the first two groups with this ammo.  I was looking for how the ammo grouped and how it compared to each other.
Remington Premier Accutip 165 grains, 100 yards, 2.55" group 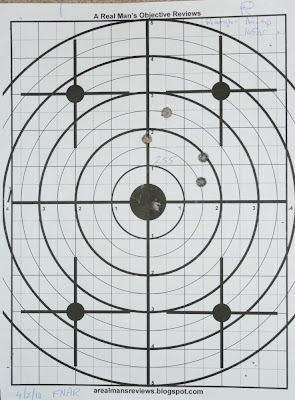 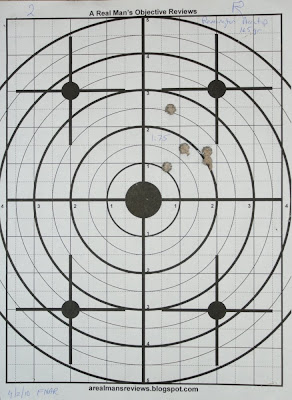 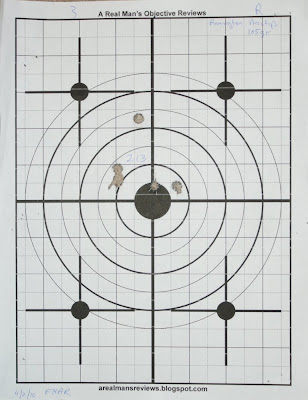 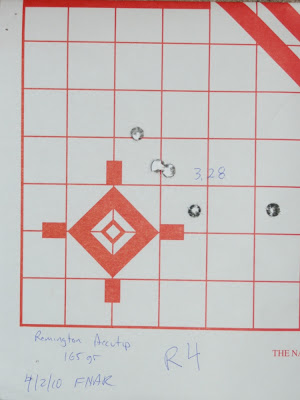 The last ammo that I planned to checkout was the Federal Premium Vital-Shok® Sierra® GameKing® BTSP 165 grains.  Actually this was the best grouping hunting round out of the three and will probably be what I head to the field with in the fall.  Although, I can see that many more range evaluations are going to occur between now and hunting season.
Federal Premium Vital-Shok® Sierra® GameKing® BTSP 165 grains, 100 yards, 1.54" group 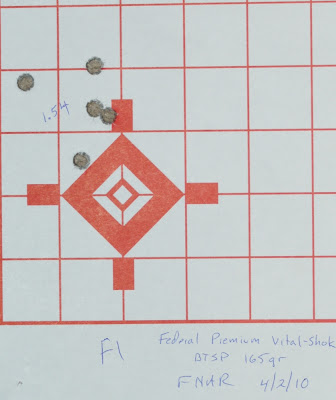 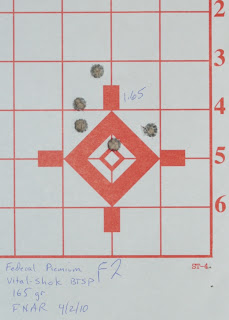 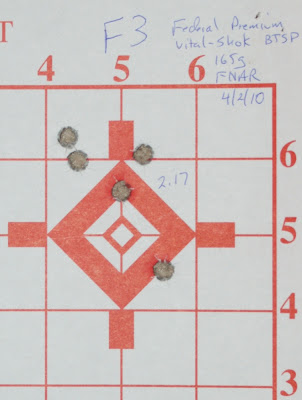 Federal Premium Vital-Shok® Sierra® GameKing® BTSP 165 grains, 100 yards, 4.75" group.  This was the last of all my 5 shot groups and I believe that concentration fatigue was setting in since I had been at the range for 3 hours at this point and I must have let the rest start the side to side rattle again.  On the bright side, those three (yes three) shots in the center do look good. 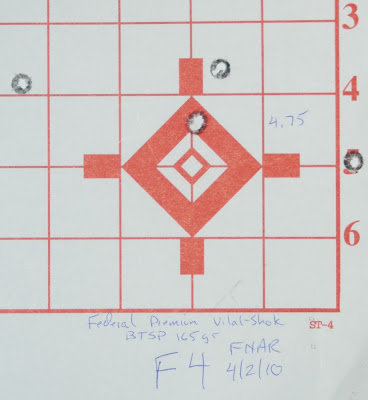 I shot these next two groups with two different full 20 round magazines and tried to shoot a round about every 3 seconds (as fast as the range allowed).  I also let the barrel cool down between each 20 round group.  I was pleased so see how well the cheap plinking ammo grouped.  I'm sure I will purchase more of the PMC in the future.
PMC 147 gr. FMJ-BT, 100 yards, 20 shots, 3.58" group 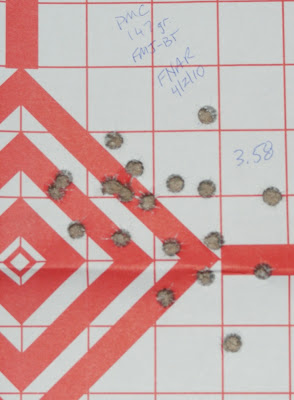 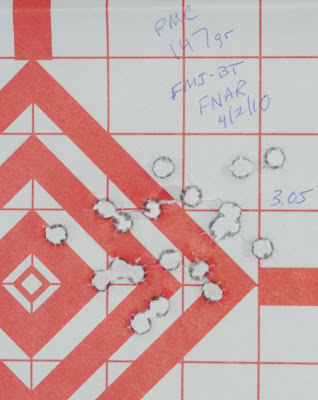 This table below summarizes all the shots for this test and their group size.  Just for kicks, I decided to recalculate the group size by throwing out the worst shot for any group.  Is this fair?  Possibly, because it may be the best way to take a little of mine and the rest's inaccuracies out of the groups.
While I was shooting, I did notice something about the way the cases ejected out of the rifle.  The PMC ejected completely different from the others.  Actually the PMC would eject very close to the side of the rifle.  Sometimes, it would actually hit the side of the receiver as shown in the photo below.  Since the brass is softer than the receiver material, a few good rubs with a cleaning cloth removed the marks and it did not damage the receiver.  If you are big into plinking, you will probably end up with the finish on the receiver wearing down in this area.  I'm curious to see what will happen with a different brand of plinking ammo. 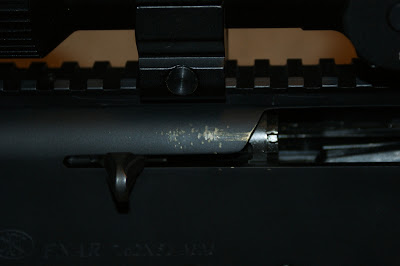 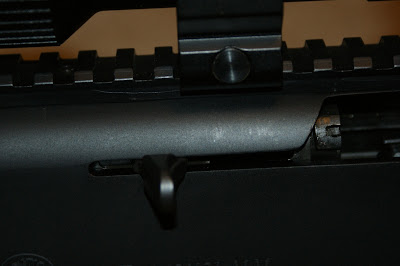 What did I learn or should have done differently?
If you read this post and can give me some other pointers or comments, PLEASE use the comment feature below.
Update 4/4/10:  After reflecting on this day and looking back at the 25 yard indoor range results from a few days earlier, I think I would have been better off using the Bulls Bag with it sitting on my gun case.  I really believe I would have had better results.
You can see all of my posts on my FNAR rifle by going to my Summary Page.
Posted by Kevin at 7:56 PM