Rock River Review, RRA Review, Rock River Arms Review, LAR-15 Review
With so may AR style rifles on the market and so many interchangeable accessories, many features and details on this rifle are common with the other rifles on the market.  In this portion of the review, I'm going to try and give you enough photos and data so that you can see what may be common and what may be different.  The best place to start reviewing the rifle will be with the Rock River Arms Coyote Carbine advertised specifications shown in the photo below from the Rock River Arms website.  Note: Remember that the picture below shows the newer RRA Operator A2 stock and the rifle I'm reviewing has the older ACE AFRX Skeleton Stock.

Caliber
The carbine comes in the 5.56x45mm NATO caliber which means it can also safely fire .223 Remington.
Upper Receiver
The rifle comes with a forged A4 upper receiver.  Actually it is made from forged and milled 7075 T6 aluminum alloy that is then hard anodized.  This is common with many AR makers on the market today.  Some of the key components of the upper receiver assembly are the charging handle, integrated upper rail, forward assist, ejection port cover assembly, and shell deflector. 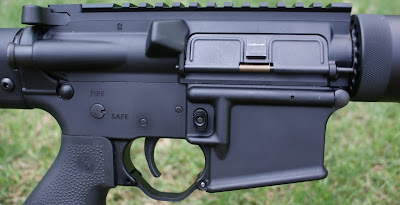 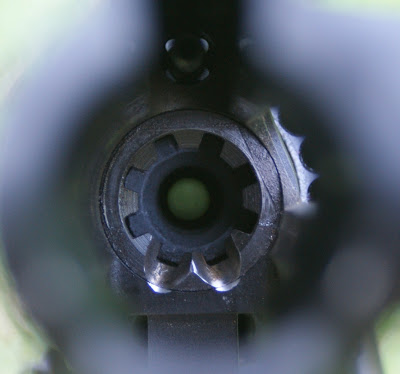 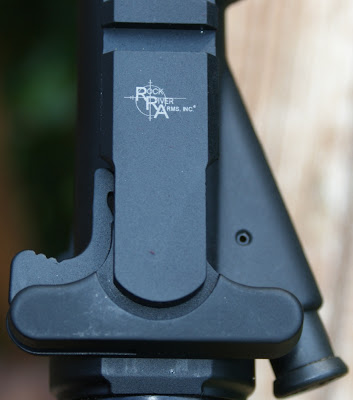 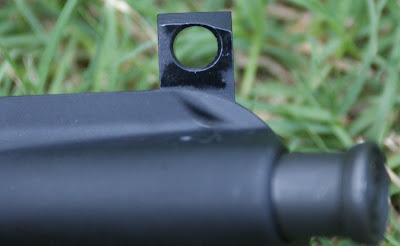 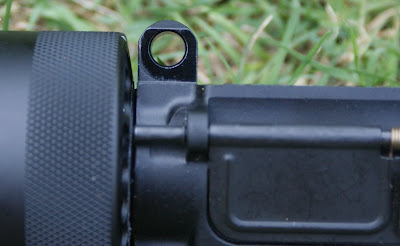 Barrel
The rifle comes with a 16" chrome moly heavy barrel.  The rifling's are at a 1:9 twist.  This twist rate should stabilize up to 69 grain bullets. 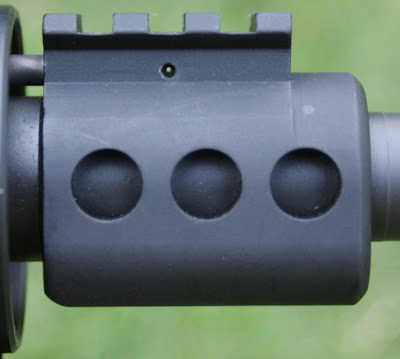 Muzzle Device
The rifle comes with a Smith Vortex Flash Hider.  The key points for this flash hider are taken from their literature as shown below in italics.
Based on the combat-proven Vortex® 5.56mm G6A1 system, the definitive development of the patented Vortex® design now features a 40% increase in structural rigidity. The new G6A2 model features our patented 15-degree helix, guaranteeing a complete propellant burn and negligible flash, unlike the standard issue closed-end “bird cage” unit or competing straight-flute designs. Right hand helical flutes will not loosen under sustained fire. The flute configuration is 40% stronger due to greater mass. The aligning of exiting gases helps to improve overall accuracy.  The G6A2 also serves as a quick-connecting interface for our new M4DC CQB Sound and Flash Suppressor.

Trigger
The rifle comes with the RRA Two Stage Match Trigger and RRA Winter Trigger Guard.  I really like the trigger on this rifle, especially when compared to my old Colt AR-15 Sporter II.  The RRA Two Stage Match Trigger comes to a stop at about 0.08" (measured at the tip of the trigger) when pulling through the first stage using 2.23 pounds of force.  During the second stage, there is no detectable movement as you increase your pulling force to 3.05 pounds and the hammer releases.  When shooting the rifle, a slight increase in pressure with your finger will probably surprise you during your first couple of shots.  I like the looks and functionality of the Winter Trigger Guard, but am not sure I want to pull this trigger while wearing gloves. 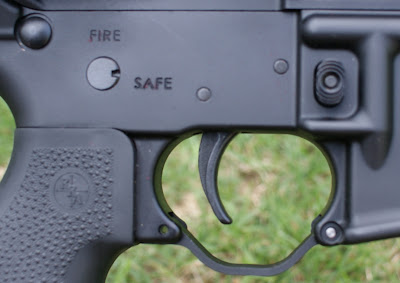 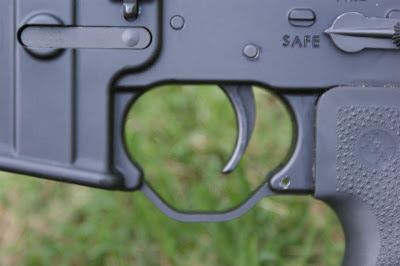 Handguard
The handguard is the Hogue AR-15/M-16 (Carbine) Free Float Foreend with OverMolded Rubber Gripping area.  The rubber gripping area is the textured area shown below in the middle of the handguard.  I really like the way the rubber seems to make the rifle stick to your hand.

Pistol Grip
The pistol grip is the Hogue AR-15/M-16 Rubber Grip with Finger Grooves.  Just like the handgaurd, the texture feels good in your hand and I have a personal preference for finger grooves. 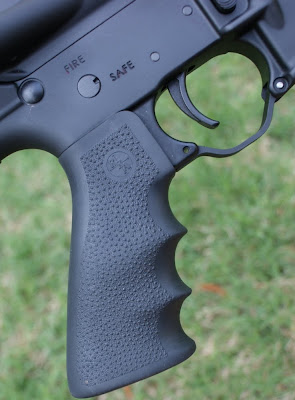 Buttstock
The rifle I'm reviewing did  not have the new RRA Operator A2 Stock.  It actually has the ACE AFRX Skeleton Stock.  Since I'm 6' 2", I found the buttstock to be a little short for my preference, although shortness is the key point of a carbine rifle.  Also, I'm sure that a thick coat would give a better feel.  There is foam surrounding the buffer tube portion of the stock.  This foam makes a cheek weld comfortable. 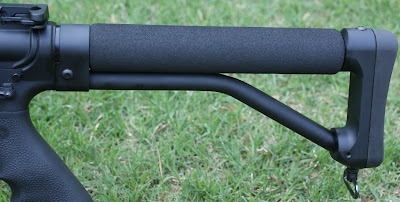 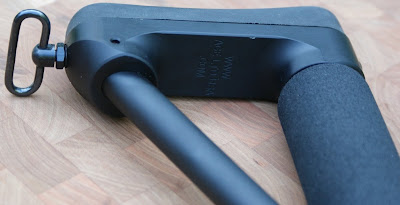 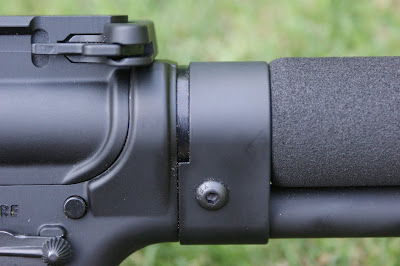 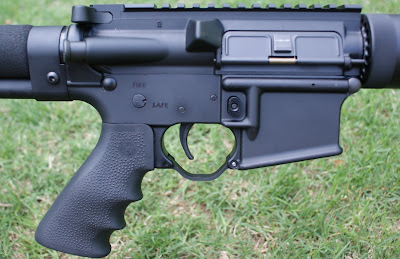 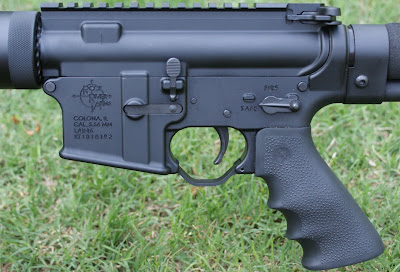 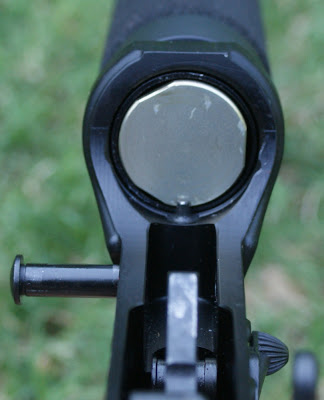 Bolt & Carrier Assembly
As you can see from the wear on the bottom of the carrier assembly, this rifle has already been to the range three times.

Weight
The rifle weighed in just as advertised, 6.99 pounds (basically 7.0 lbs).  Remember that this is the empty weight, with no magazine or sights/scope.  The final rifle with mounts, scope and a full magazine weighed in at TBD pounds. 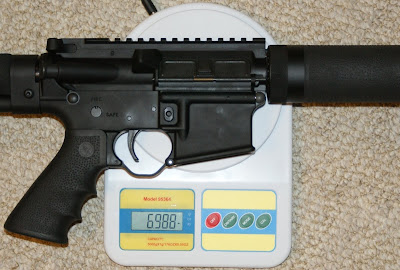 Upper to Lower Receiver Fit
I checked the fit between the upper and lower receiver by rotating them such that all the slack was to one side.  I then inserted a feeler gage and measured the gap.  In general the gap was about 0.006" throughout.  It did tighten at the rear end slightly, but only to about 0.005".  This gap is clearly less than my older Sporter II, but I'm going to have to review many more rifles to get a better feel for how this compares to other manufacturers. 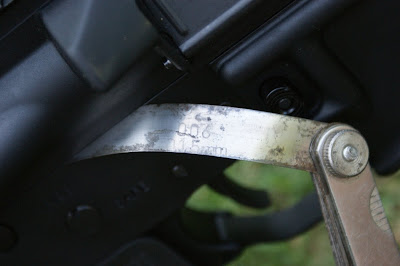 The Rifle
I have tried to show enough photos and data to give you a good idea of this rifle's features and quality.  Overall fit and finish of the rifle seems good and the incorporation of aftermarket grips and stock makes it a good choice for those value minded people wanting to get these accessories anyway.  I remounted the Burris PEPR mount and Nikon Coyote Special Scope back on the rifle and will write up a review of those items in the near future.  You can see the setup below.  Also showns is a Harris Bipod.

Remember that this rifle is advertised as having 3/4" MOA accuracy.  Part 4 will cover my range testing.  3/4" MOA is a pretty aggressive claim for any rifle of this type, but just to give you a preview, take a look at the group below.  This was my best group at 100 yards (0.55" three shot group).  My feeling is that it is capable of 3/4" MOA. 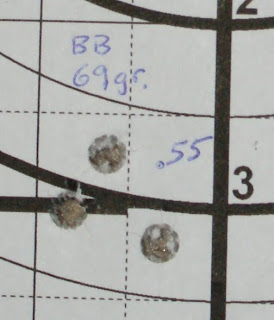