The FNAR comes with six stock shims.  The shims fit between the stock and receiver, allowing customized adjustments to fine tune the cast and drop of the stock.  Each shim is labeled for a specific amount of adjustment.  The rifle comes with the neutral shim (No. 2) already installed.

Just to be clear, I think it is important to define a few terms because this blog uses these terms to describe what the shims will do to the buttstock.
The shims marked 1, 2 and 3 only affect the comb and heel positions (no cast).  The stock will remain straight and adjust the drop only.
The shims marked 1R1L, 2R2L, and 3R3L will adjust the drop at the comb the same as shims 1, 2 & 3 and will also adjust the comb right or left ~1/8".  For example, 1R is marked on one side of the shim and 1L is on the other side. The cast will be to the right or left based on which letter is facing towards the buttstock.  An R facing the buttstock would be cast off (to the right) and an L facing the buttstock would be cast on (to the left).
Just like with my last post on the inserts, I'm going to hold off on making a final decision on the stock shims until I get my scope mounted.  Even then, with all the possible combinations, it may take me a while to zero in on the best configuration for my shooting style. The engineer in me is already leaning towards keeping the barrel and stock on a common center line, so I may have already down select some of the combinations. 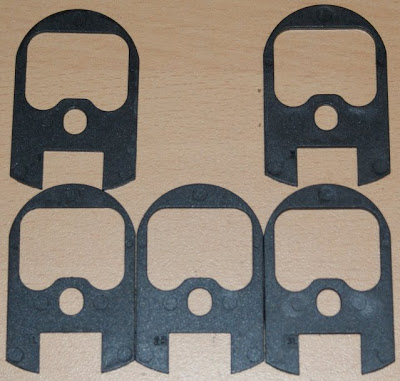 You can see all of my posts on my FNAR rifle by going to my Summary Page.  Also, don't forget you can click on a photo and it will give you a high definition image so you can see more details.
Posted by Kevin at 8:05 PM