Bipod Adpater Review, Picatinny Adapter Review, Rail Review, Shooters Ridge Review
If you have been following my blog (reviews), then you will know that I purchased a Harris Bipod and did a review on that product the other day.  You can see this review at this, Harris Bipods Series S Model 25C Review or by clicking "Harris Bipods" under the "Labels" heading on the right.  The reason I'm telling you this is that their bipods are designed to mount to your front sling swivel stud.  This works great on my hunting rifles.  My problem is that I plan on doing some coyote hunting with my AR-15 rifle.  This rifle has a full quad rail, but no sling swivel stud.  Thus I need an adapter.  After doing some researching on the internet, I finally decided to get the Shooters Ridge Bipod Picatinny Rail Adapter.  It looked decent and the price was right.  I got it at Opticsplanet.com for $9.99 and was already ordering some other stuff, so shipping was covered.

The package is below with photos of the front and back of the cardboard insert inside the package. 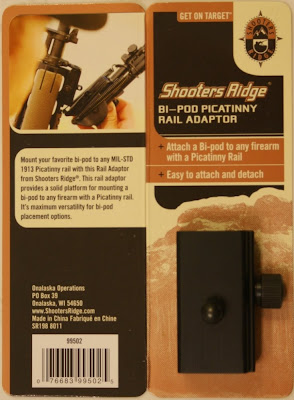 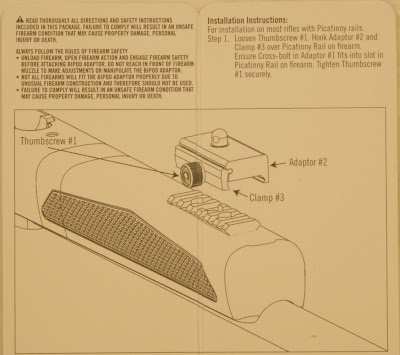 My initial thought when I took it out of the package was that it seemed long.  It measured 2.0" long.  Later I came to the decision that length was a good thing.  The stud is offset for a reason which you will see later.  General photos of the picatinny rail adapter are below. 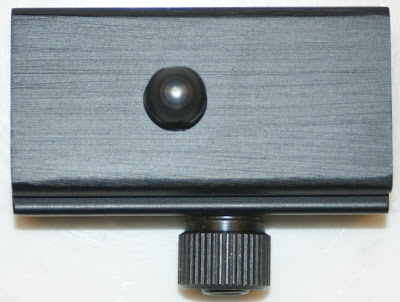 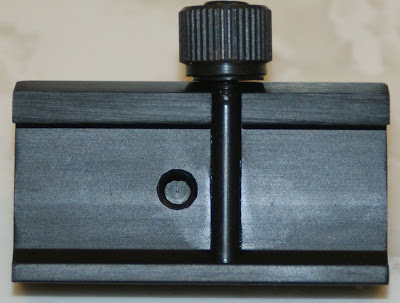 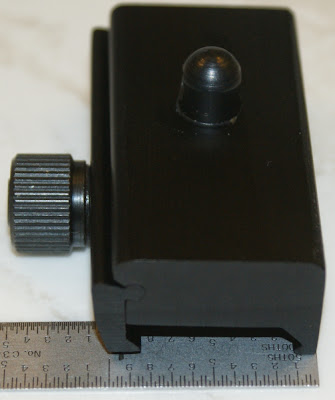 In this next photo you will see that the thumb nut is prevented from being screwed off the cross bolt by the nylon locking hex nut embedded in the thumb nut.  This is a great feature because it prevents you from ever screwing the thumb nut off and the letting the pieces get separated.  Also notice that the moveable side bar is captured in the main block by the puzzle like connection.  When you loosen the thumb nut, the side bar will not pop out of place. 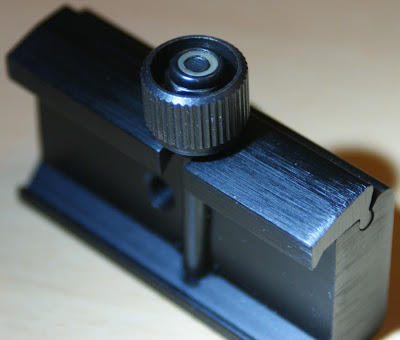 Up above I said you would know why the stud is offset.  The two photos below show why.  For the Harris bipod, if you install the short side of the stud forward, then the adapter will be contacting the bipod attachment in the center of the interface area (left photo).  If you flip it around, you can see that the bipod is shifted all the way to one side (right photo).  From a support perspective, the bipod centered on the adapter provides better support to the bipod.  It looks like Shooters Ridge did some planning to make this happen.  I think the instructions they sent on the back of the package insert show a mount similar to the right photo.  Either way, it still supports the rifle well. 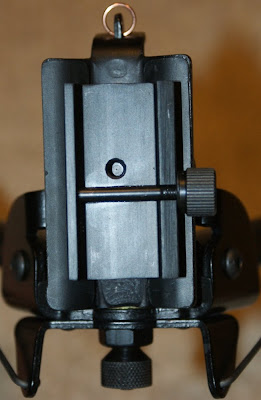 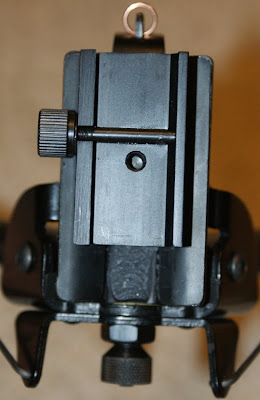 You can also mount the adapter directly to the bipod and then use it as a quick attachment to your rail. 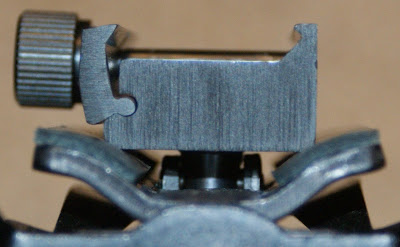 You can also install it on your rail and then install the bipod when needed.  When the bipod is not installed, you can use the adapter as a forward sling swivel stud.  In the photo below, I actually have it installed in what I would consider to be a backwards configuration (long side forward). 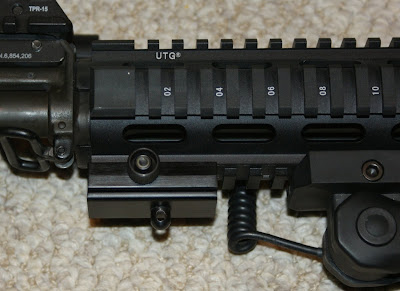 The next two photos show the picatinny rail adapter and bipod installed on my AR-15.  Again notice the the bipod is shifted all the way to one side of the adapter.  I decided to go ahead and show these photos because it gives you an idea of the less optimum case for installing the adapter.  Keep in mind that it had no trouble supporting the rifle and a quick flip of the adapter would have corrected this.  I don't have any other bipods at the moment, so if yours is different than the Harris, I suggest taking a look and determining the  optimum way to mount the adapter. 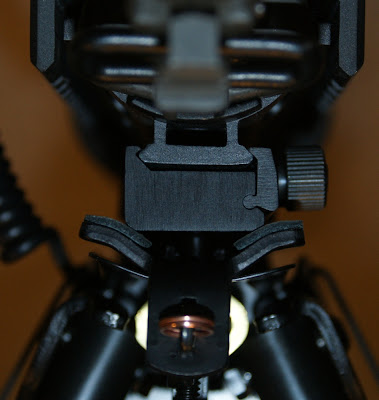 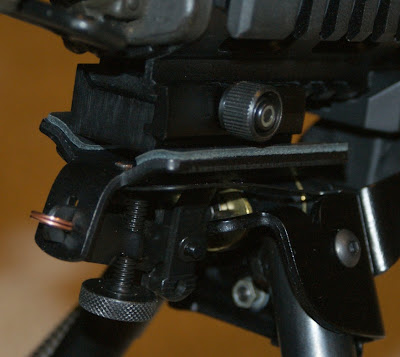 Bottom Line:
If you are going to purchase a bipod that mounts to the sling swivel stud, go ahead and get an adapter if you have any other rifle that has a lower rail and no stud.  It is cheap and gives you the versatility of using your bipod on more rifles.  The Shooters Ridge Bipod Picatinny Rail Adapter is well worth the money.  It seems of good quality and they did put some engineering into this simple device.
Posted by Kevin at 7:56 PM